Connecting IdM to a eIDAS node

Secure electronic identification (eID) is one of the key enablers of data protection, privacy and the prevention of online fraud, especially in new areas of application, like Smart Cities, where incorporating real identities into trustable infrastructures has a huge potential.

eID can guarantee the unambiguous identification of a person and make it possible to get the service delivered to the person who is really entitled to it. The Electronic Identification, Authentication and Trust Services (eIDAS) Regulation provides a solution to European Member States for recognizing and accepting eIDs issued in other Member States.

Technical specifications and reference implementations of the interoperability nodes for the eID mechanisms were published as open source on 26th November 2015 for the technological infrastructure under Connecting Europe Facility (CEF) program.

The ultimate goal is to offer the possibility to EU citizens to use their national eID in other EU countries when accessing public and private services online.

Thus, every service deployed according FIWARE security basis, is now accessible by european citizens using their eID and in a transparent way for service providers.

The FIWARE identity - eIDAS authentication module allows a user with a valid eIDAS account (provided by its national eID) to directly login in the IdM and obtain an OAuth 2.0 access token that represent him/her in terms of authorization.

For enabling this, the service has to be registered in both IdM and eIDAS node. The service is registered in the IdM as a regular Application, including some extra configuration parameters as explained below. On the other hand the service has to be registered in the eIDAS node as a Service Provider following the procedure of the specific Member State. Then, when the user is going to authenticate in the IdM it will have the option of selecting a kind of “Login with eID” option that will redirect it to the specific authentication gateway.

Then, the IdM and the eIDAS node will interchange the needed SAML requests to finally obtain the user eIDAS profile. With this profile, the IdM will create a local user mapping the received attributes with the local ones and creating an authorization code. This code will be sent to the Service and the Service will finally request the Access Token.

Once the service has the Access Token, it can use it as always to authorize requests to other GEs. Furthermore, as the user is created in the IdM, permissions and roles could be managed in the same way than for a regular local user. Next figures show the architecture and the dataflow interchanged between the entities. 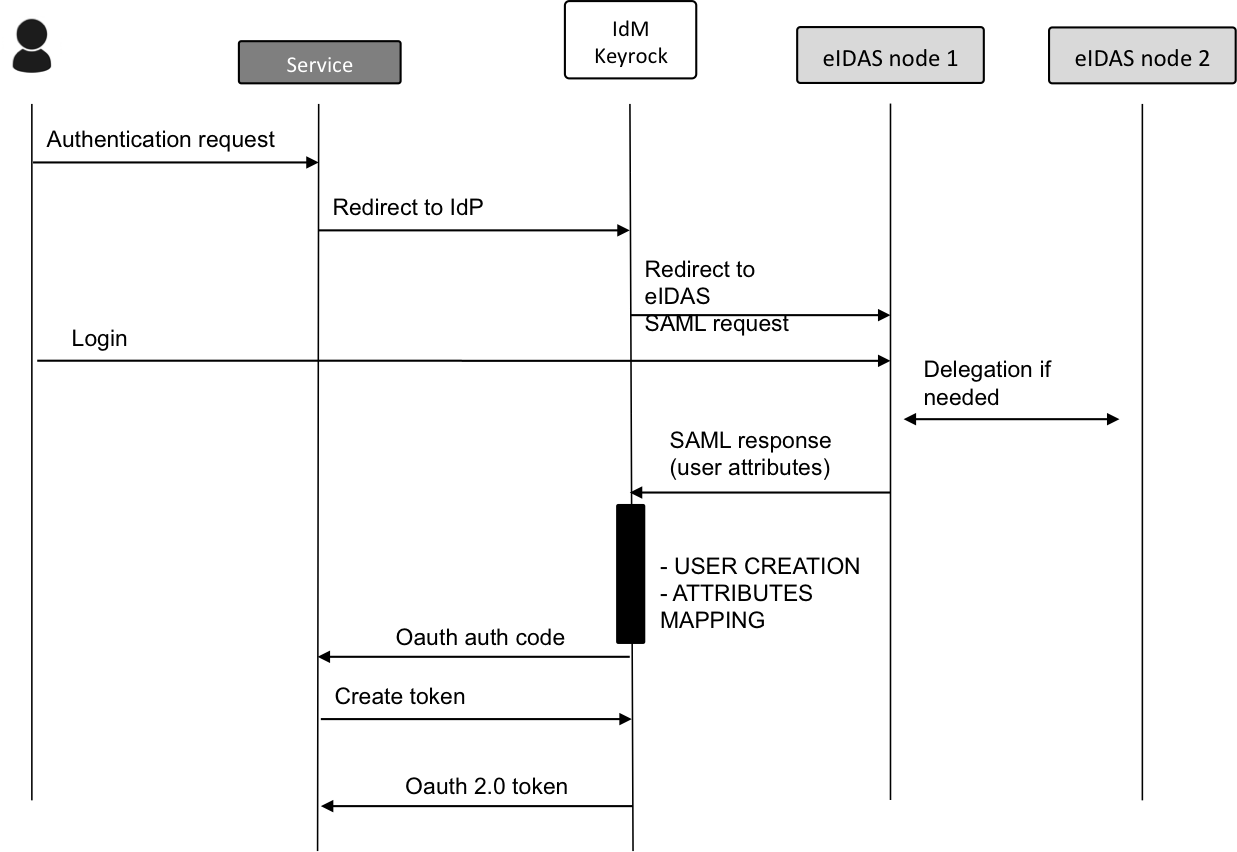 For configuring IdM to allow users to login with their eID, the connection to a eIDAS node has to be enabled in the configuration file:

Registering an application as a eIDAS Service Provider

Once the IdM has be configured to support eID authentication, registered applications can enable this kind of authentication indidually.

During the registration process a new checkbox is included as seen in the following image: 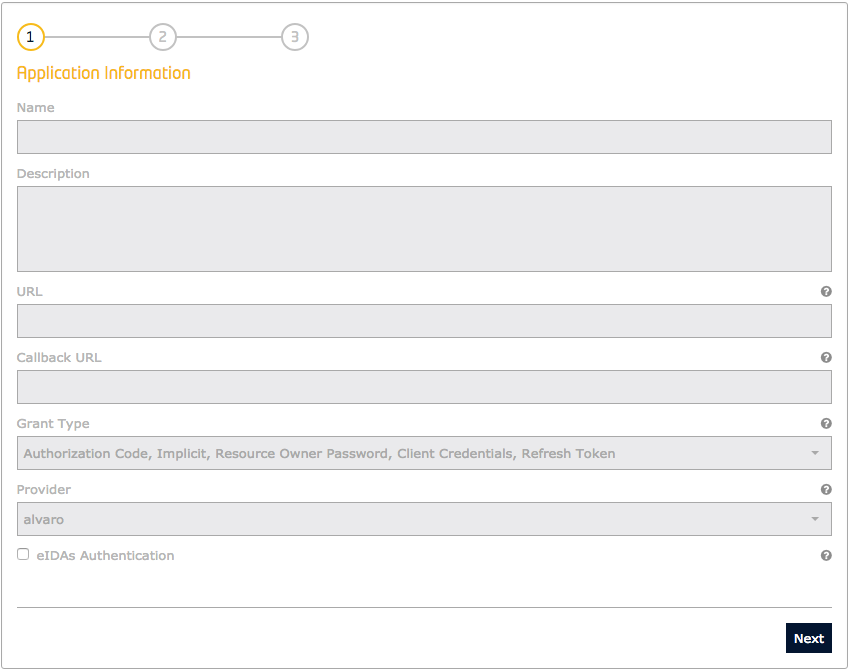 Then, a new step in the registration process is included. In this new step the data regarding the Service Provider registered in the eIDAS node has to be filled. 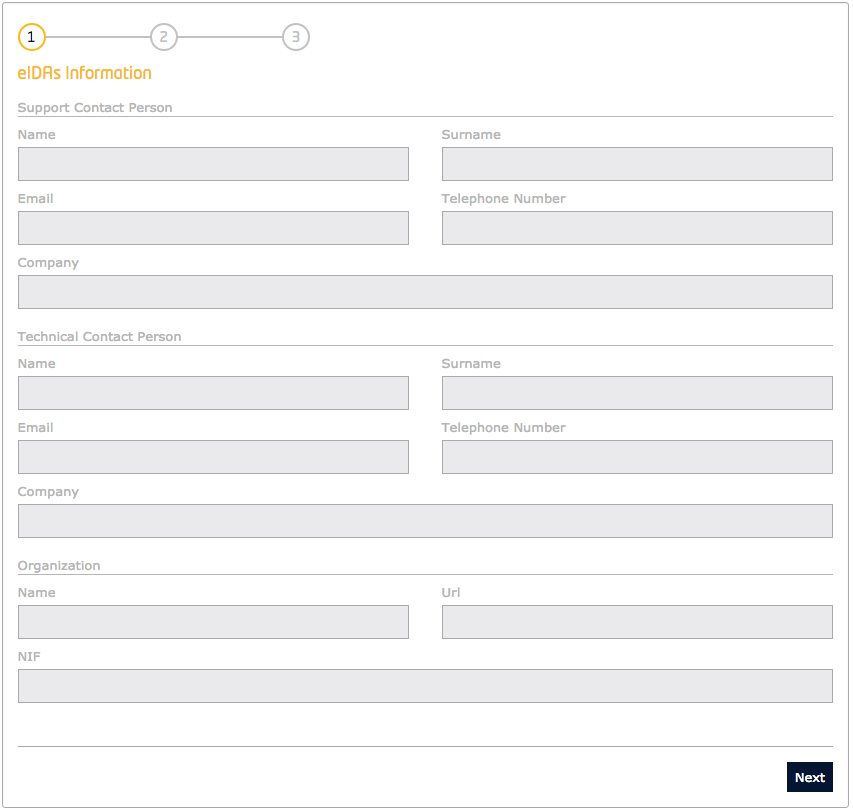 Once the application is registered, the metadata of the Service Provider is exposed in the endpoint http://idm-host/idm/applications/

When clicking in the option Sign with eID the user will be redirected to the eIDAS authentication gateway to login using his/her national identifier. For instance, the spanish gateway has the following interface:

If the user selects the option for authenticating european citizens, he/she is redirected to a new view in which, selecting the specific country, she/he can authenticate using her/his national identifier:

Once the authentication is performed, the eIDAS node sends de SAML response back to the IdM. Then, IdM extracts the user information from the response and proceeds with the creation of a local user.

Once the local user is created, Keyrock generates an OAuth 2.0 access token as for a regular user. This token can be used for every authentication/authorization process in registered applications. Thus, from that moment the local user is an eIDAS user and, therefore, has the same rights and features than every user registered in Keyrock. The user data is included in the token validation information when it is checked, for instance, from a PEP Proxy.

The next time the user wants to authenticate using eIDAS the process is the same one. However, after the eIDAS authentication, IdM detects the user has been already created in its database and it does simply create the token without performing the user creation.